Rayani Air, the first Sharia-Compliant full service airline in Malaysia, has caused a lot of havocs among its paid customers since started operating just in a few months.

The latest one was yesterday, watch the video below. 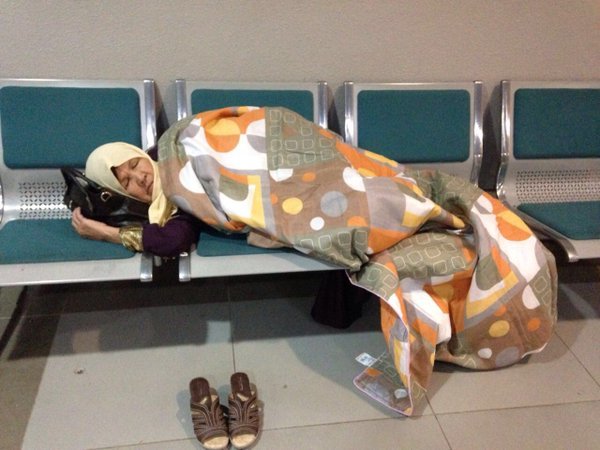 -At 3.55pm 17/3/16 only we received phone call informing about the delay.
We packed real fast & drive straight to salak tinggi to park the car. Took erl from salak tinggi & arrived in front of the check-in counter at 5.53pm just before the closing time.
-For almost an hour i’m staring at the empty gate. The flight is still flying around somewhere. The gate is empty - no flight - while we went through the hustle to get here on time.
-At the moment i’m done writing this at 7.09pm, the flight just arrived from somewhere else. Still need to let the passengers out & everything. Still late, and unprofessional. No explanation whatsoever.

I’m so disappointed with the service. FEW TIMES DELAYED & THEN RE-TIMED EARLY. THAT IS NOT HOW AN AIRLINE SHOULD OPERATE.
Luckily we have flexible working time. Imagine others that still at the office, or having important meetings, or simply they don’t read those emails. How would that be for them? Simply cancel the flight while already booked the hotel, rent a car & everything? Surely their kids will be so disappointed that they couldn’t spend school holiday as planned. My heart reach out to those people.
To those who want to try your luck with Rayani Air, i strongly opposed the idea. Choose another airline company, please.
To those who already bought tickets, my sincere advice is to CHECK YOUR EMAIL EVERY HOUR PRIOR TO DEPARTURE. Good luck, guys.
Yusnuriza, 17/3/16
Sitting inside the waiting hall, staring outside the window feeling so angry.
(Sorry for ranting this out, guys. I’m just so disappointed.)
*Updated : 8.35pm - the flight is just started moving. We’ve been sitting on the aircraft without aircond for about 5 mins / with very minimum air-conditioning since 7.42pm. It’s so hot. The flight is a bit smelly, too. All passengers were mad & i heard someone said - ingatkan naik bas tadi. Haha

**Updated again : safely arrived at kb on 9.35pm, the 1st thing i notice was a very long queue of angry people. God knows since when they were waiting for this flight.
On a bright side - they recited prayers before departure, the pilot apologized many times for the delay, and the inflight snacks was good. But will i fly again with rayani? Maybe not.

PETALING JAYA: A pilot strike has caused the cancellation of certain Rayani Air flights, according to several customers who were informed about it several hours before flight time.

At least three flights from Kuala Lumpur – scheduled to fly to Langkawi (RN182), Kota Kinabalu (RN130) and Kuching (RN154) on Friday – were cancelled, according to posts on social media by unhappy customers.

Siti Nadwatul Shima Nor, 24, said her flight to Langkawi was rescheduled three times before it was finally cancelled.

The texts initially told her of a “re-timed” flight, before she received more texts citing a “pilot strike” and “operational requirement” informing her of the cancellation.

“Their call centre even contacted me today to remind me that the flight was on as scheduled – but it ended up being cancelled,” she said.

Siti Nadwatul and 10 of her family members – including her wheelchair-bound father – had booked tickets on Feb 3 for a trip to Langkawi.

“I don’t have a choice but to take my family members on a bus and buy us ferry tickets to Langkawi,” she told The Star.

Siti Nadwatul said she would not be using her Rayani Air return ticket for the trip back to Kuala Lumpur, and had booked return flight tickets from another airline.

“This is so stressful, time-consuming and a waste of money,” she said.

Real estate agent Des Jr Lee, who was supposed to fly to Kota Kinabalu with his fiancé at 7.45am on Friday, received a text informing him of the cancellation at 3am due to “pilots on strike”.

The 31-year-old had to fork out RM1,000 for two new tickets from two different airlines for the couple’s trip to Kota Kinabalu.

After seeing his fiancé off on an earlier 6pm flight Thursday, he had to stay the night at the airport for his flight at 6.30am Friday.

"Despite the minimal communication between ground staff and their superiors, they did their best to handle the situation.

When contacted, a Rayani Air spokesperson said she was not authorised to comment on the matter and asked to contact the airline founder instead.

However, calls to founder Ravi Alagendrran went to voicemail.

The company’s owner, Ravi Alagendrran, told mStar Online (The Star’s malay language news portal) on Saturday morning that the suspension would last for a period that will be announced at a later time.

“This is part of a company restructuring plan. We will be operational again once after carrying out the restructuring,” he told the portal via text message.

According to Ravi, company officers had also been given the same information via email.

Based on the email, Ravi requested his officers to order their respective divisions to cease operations and to “recalculate the company’s assets”.

“All refunds and questions concerning passengers who have made early bookings, should be extended to info@rayaniair.com or through the customer service call centre at +603-27214925 (operational everyday from 9am till 6pm),” said Ravi.

mStar had tried to get confirmation from Department of Civil Aviation (DCA) chief Datuk Seri Azharuddin Abdul Rahman regarding the suspension, however, so far, attempts to contact him have been unsuccessful.

Ravi also confirmed that Rayani Air was forced to cancel flights following a strike organised by its pilots.

It was reported that the move by the pilots to strike, had caused a number of Rayani Air flights to be cancelled.

The situation became more complicated when passengers became unsatisfied when they were told about the cancellation only a few hours before their flights were scheduled to depart.

At least three flights from Kuala Lumpur (to Langkawi, Kota Kinabalu and Kuching) on Friday were cancelled.

Sofia Kumang: Giving notice thru sms & email at 12.30 am… suppose to fly back to kch at 7.45 am this morning. N only can call u guys at 9am to 9pm… ada fikir ke kalau orang tu ada urgent matters dekat kampung?? U shud let us know 3 or 4days earlier. Bukan suddenly sms at 12.33am. Sy bukan superman or batman or kluangman or any other superhero yang tak tidur utk selamatkan org2 yg dlm kesusahan di waktu malam. Pukul 10pm sudah tidur coz 5am sy kena bangun n pergi airport. N bila check phone receive that kind of message. N i didnt receive any single phone call from u guys. At least u guys call n explain to us. We’re not paying that air ticket pake aik liur. For sure if refund mesti tunggu for few months kannnnnnn. Sorry Rayani Air… bye2. Stressssss

50% off flights for Rayani Air passengers travelling from today until 27 April 2016.

Leave your worries behind with us! Just drop by any AirAsia Travel & Service Centres (ATSC) at any of these airports below, present us your confirmed Rayani Air flight booking, and we’ll give you 50% off your AirAsia flight ticket for the same departure date. 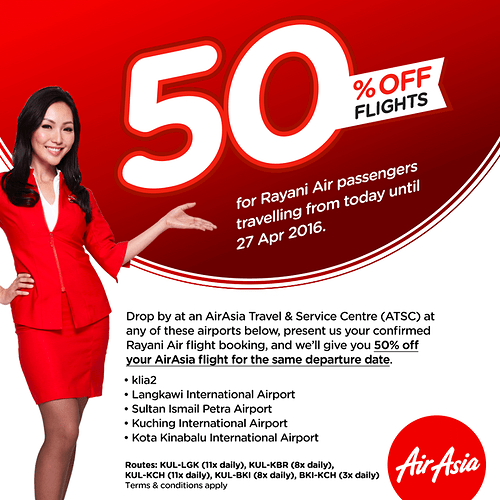 Malaysia Airlines Chief Commercial Officer Paul Simmons said, “As the national carrier and as caring Malaysians, it is our duty to extend any assistance to ease the burden of impacted Rayani Air passengers. In this case, we are offering affected passengers a special fare to connect them to their intended destination. We hope this offer will help alleviate the passengers’ travel woes”

To take advantage of this special fare, affected passengers will need to present their email on proof of travel booking on Rayani Air. Passengers may call 1 300 88 3000 or visit any Malaysia Airlines ticket counters nationwide.