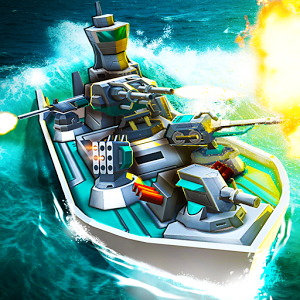 Build the biggest, most blisteringly powerful battleship fleet imaginable, then fight back against the tyrannical Blackwater navy in this innovative action-RPG from the makers of Bloons TD 5.

You are a captain in the New Coastal Alliance, a coalition of surviving national and private fleets held together by the need to confront Blackwater. You must arm your ship, collect valuable Blueprints to build your strength, and assemble a fleet of warships mighty enough to challenge Blackwater and allow our world to rebuild.

Single player offline play is supported, but for best experience, progress protection, and support, an internet connection is required to register your game data (player is financially responsible for internet, carrier, data, device, and other services).

A Note on Stores and In-App Purchases:

As a paid game, the economy and Blueprint loot systems are balanced so that you do not need to use any store purchases in order to have fun and be successful. For this reason we have provided the option for you to send the Store away entirely - you can play as if the store didn't exist by selecting "Never" for the appearance setting. If, however, you want a chance to get Blueprints or resources faster, you can choose for Salty to visit your headquarters from time to time. We're using this unconventional approach to the Store because we understand different players want different things, so please use the settings that suit you best, and feel free to give us feedback at support@ninjakiwi.com.

Download from Google Play Store This is a companion discussion topic for the original entry at http://harga.runtuh.com/2017/09/install-free-fortress-destroyer-android.html
durian closed September 5, 2018, 1:24pm #2