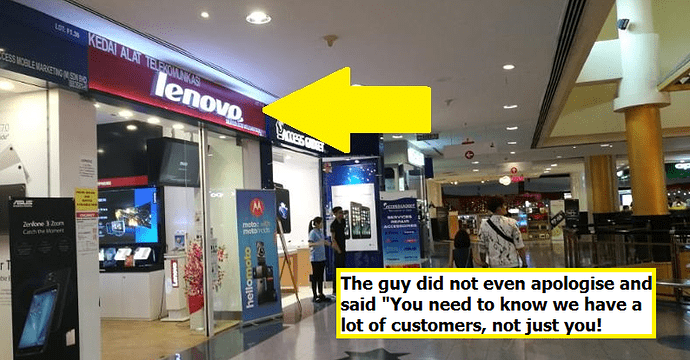 Not everyone is an IT expert or computer wizard. Which is why for those of us who aren’t very good at these things, we would leave our tech stuff to the experts.

But with a lack of knowledge about something comes one very dangerous thing – being tricked.

And unfortunately for Jia Hou and his friend, they were taken advantage of by a staff who’s working in Lenovo Sunway Pyramid.

In an e-mail, Jia Hou said,

“I have this college friend, she is from China and had came down to INTI Subang to study. Then one day, her Lenovo laptop stopped working.”

Frustratingly, the laptop could no longer be turned on and so she had no choice but to send it to that shop. She believed that sending the laptop back to its own brand’s store would be better.

Boy, was she wrong…

“My friend passed her laptop to them hoping they could fix it, and when they checked the laptop for awhile they said she had to pay RM150 for ‘checking fee’ for only touching the laptop.

“As my friend was alone she had no choice but to comply since her laptop is in their hands at that moment.”

Not only that, they had the audacity to tell the poor girl that she had to fork out RM600 in total if they manage to fix her laptop.

“So my friend gave me a call and I asked to talk to the guy. He told me different companies will have different charging fees.

“They probably think that my friend is a fool but I don’t know anywhere that charge ‘checking fees’ just by touching it.”

“To my surprise he refused to tell me and asked why would I want to know the shop’s name.

“I insisted to know and instead of telling me the shop’s name, he said he will give back the laptop to my friend and tell her to leave rudely.”

But at that point in time, the guy did not return the lady’s laptop. He told her to wait for another 20 minutes.

Feeling worried for his friend, Jia Hou drove from Digital Mall all the way to Sunway Pyramid just to check on her and the situation. Even when he arrived at the store, they had yet to return the laptop.

“She told me she has been waiting for them to bring back her laptop from the ‘office’ for an hour and a half.

“When they finally brought her laptop back from the ‘service centre’, my friend asked, ‘why did you tell me it takes only 5 minutes for you to take back the laptop but you took an hour plus?’”

“You need to know we have a lot of customers, not just you!”

But the duo weren’t going to pay RM150 for absolutely nothing. So they haggled with the staff to have the price reduced and they were successful.

In the end, they paid RM80 just to get the laptop back.

Weird how the ‘checking fee’ can be easily haggled and lowered down to almost half the original price. Hmm… 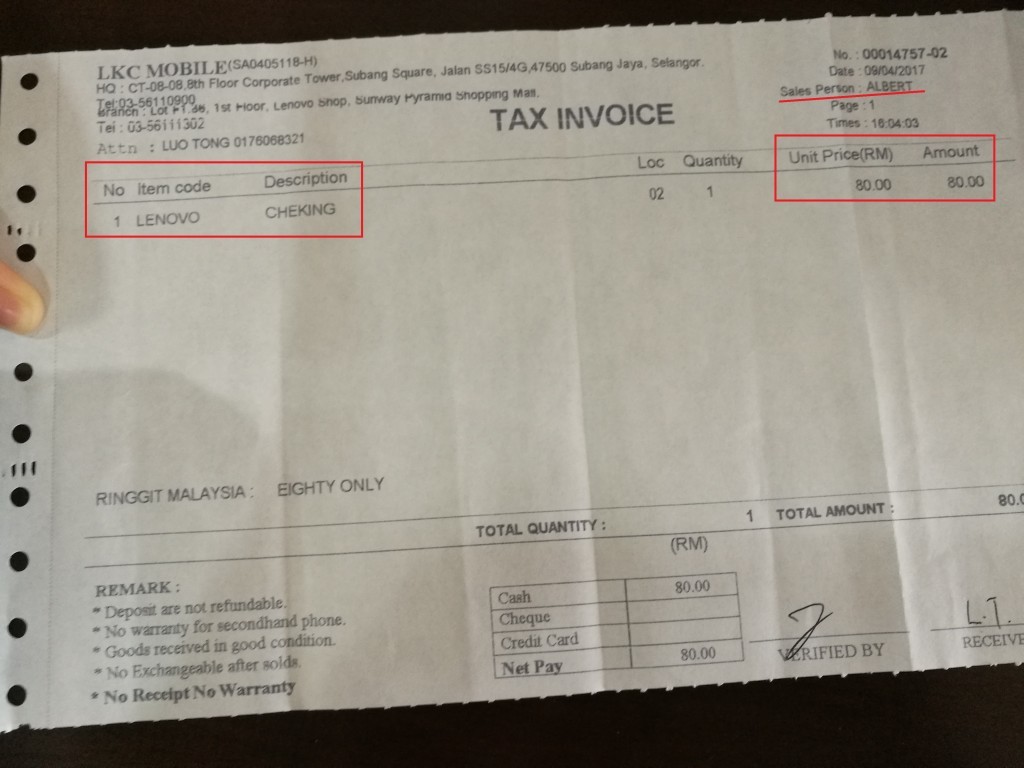 Of course, Jia Hou then brought his friend to Digital Mall to have it properly fixed. When they asked if there were such a thing as ‘checking fee’, they were laughed at by the workers there.

After the incident, Jia Hou even sent a complaint to Lenovo’s Facebook page via messenger. But he has yet to receive a reply.

The incident proved that we shouldn’t blindly trust an employee from an authorized store as there will still be unethical workers that abuse people’s trust to con their money. Always be wary guys!

Update: Lenovo Malaysia is currently conducting internal investigations as they absolutely do not condone unethical behaviour and is taking any necessary measure to make sure the issue is resolved, including reaching out the the affected parties.

This only means… the store person kena kantoi lah! 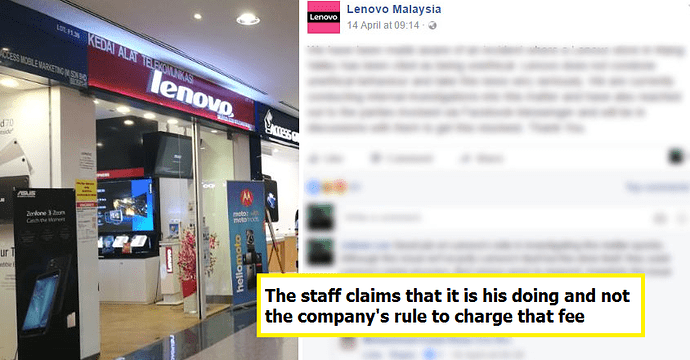 Recently, news of a student getting scammed at a Lenovo outlet in Sunway Pyramid went viral.

The staff took advantage of the foreign student by charging a ‘checking fee’ for just looking at her laptop!

Thankfully, Lenovo Malaysia was quick to investigate this issue after hearing about the news. They reached out to both parties, promptly solved the problem. The staff in question also apologised to the student.

Jia Hou, a friend of the victim, told WORLD OF BUZZ that not only did Lenovo Malaysia contact them, they even given a refund.

“The staff has already refunded us the money and also apologised for trying to cheat us of the money.”

“The staff claims that it is his doing and not the company’s rule to charge that fee, it is his own doing for charging us the ‘checking fee’.”

The member of staff in question initially claimed that it was part of the individual Lenovo shop’s way of doing things by charging the ‘checking fee’.

It wasn’t just a small amount of money either. The guy actually wanted to charge the poor girl RM150 but she and Jia Hou were able to haggle the price down to RM80.

Jia Hou graciously thanked us for the coverage, which he believed has helped fixed the issue.

“Lastly, I would like to thank WOB for putting up that post, without it, the refund would not be made possible.

“I thank you sincerely for helping us getting the attention needed for this. Thank you.”

Glad we could help, Jia Hou!

It is absolutely unbelievable that the staff could claim there was nothing to do with the shop when the receipt was clearly from the shop LKC Mobile who would believe that a staff could use company official receipt for personal cheating gain?

Another Victim from S.Korea Reveals How He Was Scammed by Sunway Pyramid’s Lenovo Staff

Just 2 weeks ago, a student who sent her laptop to Lenovo Sunway Pyramid was scammed for RM150 for ‘checking fee’ by a staff working there. After the incident went viral on social media, Lenovo Malaysia has conducted an internal investigation.

The staff later refunded the money to the victim and apologised for cheating her money. He also admitted that it was his own doing for charging the ‘checking fee’ and that it wasn’t the company’s rule as he earlier claimed.

But just 2 weeks later, another individual has reached out to WORLD OF BUZZ complaining that he had too fallen to the same scam before.

Lee from South Korea shares his dissatisfaction that the same staff cheated him and his girlfriend.

“I’ve been staying in Malaysia for 9 years. I used to have very good impression on all Malaysians, until I met this idiot.

“I have evidence of him swearing and threatening me and my girlfriend. I even took a picture of him!”

The oppa brought his laptop to the store for a check-up because the screw at the bottom was rusty.

“He didn’t say a word when I asked him about the price but I entrusted him with my laptop. I went back to the shop again on the time he set.

“However, he wanted me to pay him RM300 just for the screw. And the worse part was, he didn’t even replace the rusty screw! It was still the same rusty screw on the laptop!” 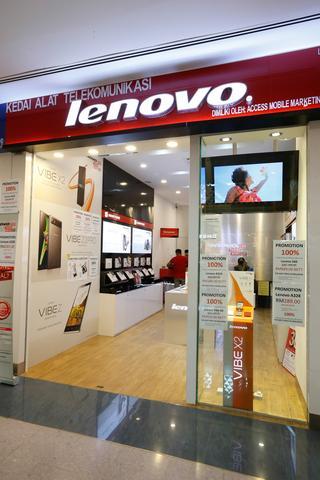 When Lee demanded for a receipt, the staff outright refused to do so. He claims that it was under ‘labour cost’. The man even had the audacity to mock the South Korean.

“He insulted me by saying ‘You don’t have money to pay is it?’

“Eventually I got the receipt with RM30 written on it. Then he had the audacity to offer me a discounted price at RM200.

“I seriously couldn’t communicate with him as I felt like I was talking to a wall.”

“He then threatened and cursed me and my girlfriend. After the incident, I’ve told my fellow Korean friends not to visit that shop anymore.”

Looks like the staff is seriously jeapordising Lenovo Malaysia and should seriously be sacked.