During Black Friday Sales, Maybank Malaysia F*cked Up. Here’s What People Are Saying.

Last Friday was considered one of the busiest days of the year for shopping.

Black Friday is a day full of discounted sales where websites and retail stores are flooded with customers eager to spend.

I was one of said people, but everything went downhill when Maybank Malaysia had the unfortunate bleep in their system that day.

Many customers (including myself) were surprised to see that despite being told that the transactions had failed, Maybank still debited our accounts. These were marked as ‘Sale Debit’ even though nothing was received on the merchants’ or consumers’ end.

Of course the logical solution would be to contact the bank immediately.

Reaching the customer hotline proved to be a struggle. If you managed to get through the automated apology of their customer care service being too busy, you would reach a looping message giving you information on what is needed to be done to change your debit card.

Not something relevant for the irate customers.

All Malaysians who were affected with this problem were desperately trying to connect with Maybank to demand an explanation. No announcements were made which is a little strange, especially on a day where a lot of failed transactions took place.

After many futile attempts of reaching Maybank through the phone, people turned to Maybank’s Facebook page to air their complaints.

There were those who said they were charged when they were purchasing items at retail stores.

Some of the failed transactions came from online payments. 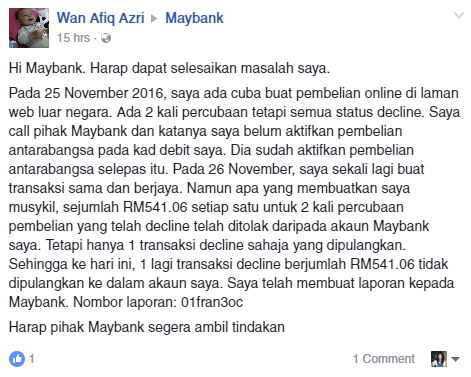 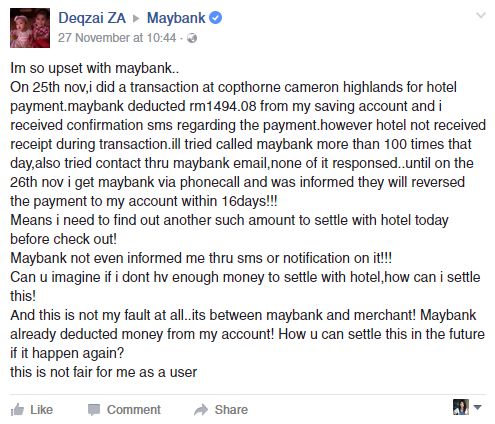 There were also those complaining about the lack of attention given to their customer care line.

And the kindhearted ones left some fair warnings for those who were yet to be affected by this problem. 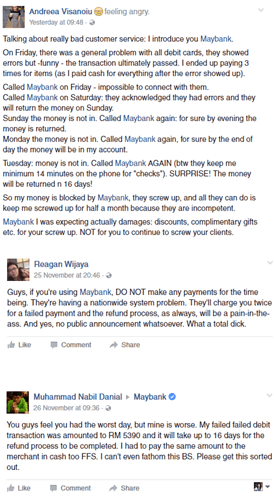 So after all of these complaints, Maybank delivered their response and pasted the same paragraph to most of the complaints posted on their page.

Obviously, most people were not satisfied with this response so they demanded to know the next step that the bank would be taking.

The answer given was that all refunds would be transferred into the affected accounts before midnight of November 27.

Time had passed and nothing happened. So the employee responsible for the bank’s social media page once again shared that the refund would be completed by November 28, before midnight.

Again, same story. Nothing happened and this went on until today where many of the people who were affected by this have yet to receive any payment (including me). 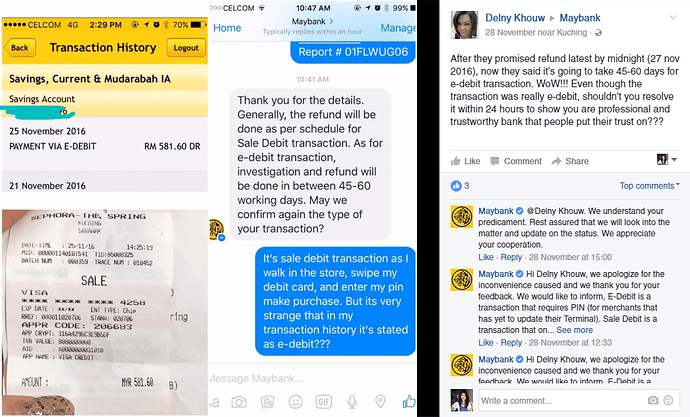 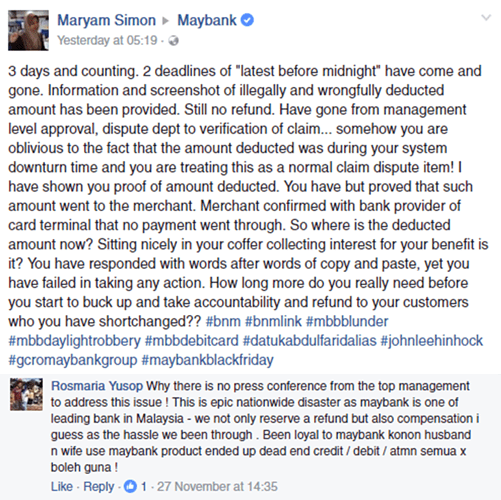 What Maybank seems to fail to understand is the anger that customers feel stems from inaccurate information being passed down.

A lot commented that the whole ordeal could have been reduced should Maybank have chosen to update about their servers having problems earlier.

As for now, the latest update is that the bank will be providing refunds into the affected accounts in batches while the customer care line is informing people that the refund will happen between 45 to 60 days.

If you are one of the people affected by this and have yet to reach out to Maybank, you can personally message their social media page and provide them your details as well as information about the failed transactions.

Or you can give them a call on their customer care line, but it is not guaranteed that will be much help.